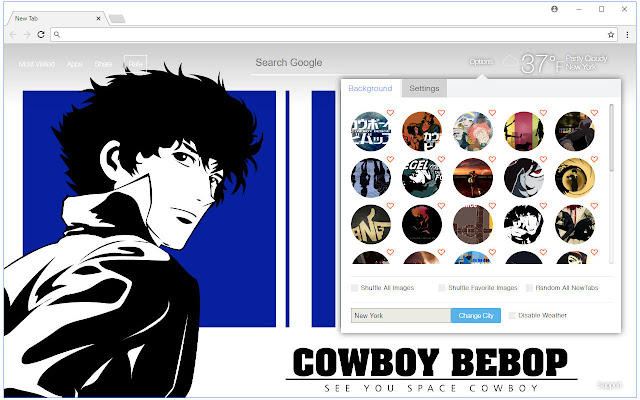 The extension is made by fans, for fans who like Cowboy Bebop and characters like Spike Spiegel, Faye Valentine, Jet Black, Edward Wong, or anime in general… Visit our homepage for more HD wallpapers and newtab themes: https://freeaddto.com/ 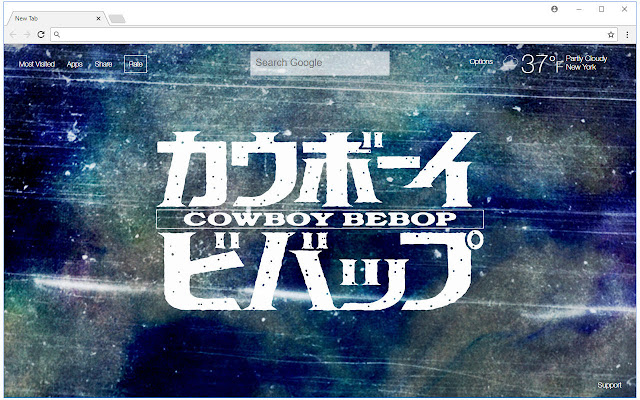 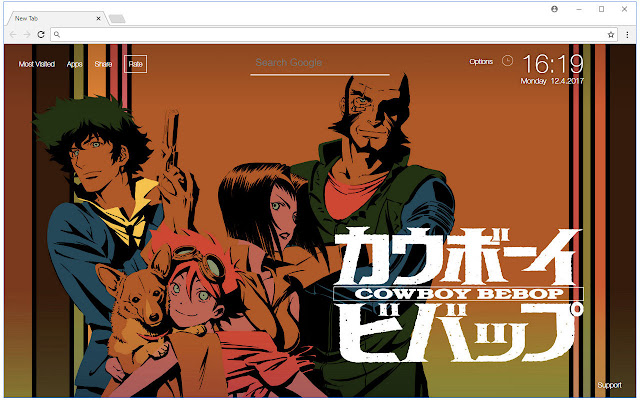 – Cowboy Bebop (カウボーイビバップ Kaubōi Bibappu) is a 1998 anime television series animated by Sunrise featuring a production team led by director Shinichirō Watanabe, screenwriter Keiko Nobumoto, character designer Toshihiro Kawamoto, mechanical designer Kimitoshi Yamane, and composer Yoko Kanno. The twenty-six episodes (“sessions”) of the series are set in the year 2071, and follow the lives of a bounty hunter crew traveling on their spaceship called Bebop. Cowboy Bebop explores philosophical concepts including existentialism, existential ennui, and loneliness.
– The series premiered in Japan on TV Tokyo from April 3 until June 26, 1998, broadcasting only twelve episodes and a special due to its controversial adult-themed content. The entire twenty-six episodes of the series were later broadcast on WOWOW from October 24 until April 24, 1999. The anime was adapted into two manga series which were serialized in Kadokawa Shoten’s Asuka Fantasy DX. A film was later released to theaters worldwide.
– The anime series was dubbed in the English language by Animaze and ZRO Limit Productions, and was licensed by Bandai Entertainment in North America and is now licensed by Funimation. In Britain, it was licensed by Beez Entertainment and is now licensed by Anime Limited. Madman Entertainment has licensed it for releases in Australia and New Zealand. In 2001, Cowboy Bebop became the first anime title to be broadcast on Adult Swim in the United States.
– Cowboy Bebop became a critical and commercial success both in Japanese and international markets (most notably in the United States), garnered several major anime and science fiction awards upon its release, and received universal praise for its style, characters, story, voice acting, animation, and soundtrack. In the years since its release, critics and reviewers, from the United States in particular, have hailed Cowboy Bebop as a masterpiece and frequently cite it as one of the greatest anime titles of all time. Credited with helping to introduce anime to a new wave of Western viewers in the early 2000s, Cowboy Bebop has also been labelled a gateway series for the medium as a whole.
(Source: Wikipedia) 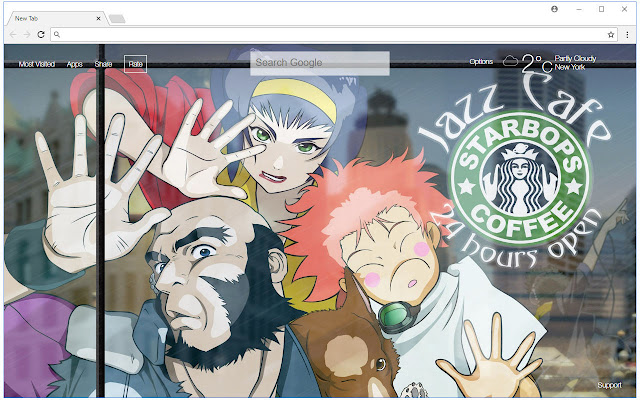 – The jazz subgenre of bebop is defined by fast tempos, virtuosity, and improvisation.
– Prior to Cowboy Bebop, director Shinichiro Watanabe’s claim to fame was co-directing 1994’s Macross Plus.
– Cowboy Bebop’s original run had a mess of episode errors, which is known to Japanese fans as the “TV Tokyo Fiasco”.
– The main theme “Tank!” by Yoko Kanno and The Seatbelts is the only certified “jazz standard” from Japan.
– Though the show is famous for its number of tributes to culture, the 1999 artbook states five major filmic influences. 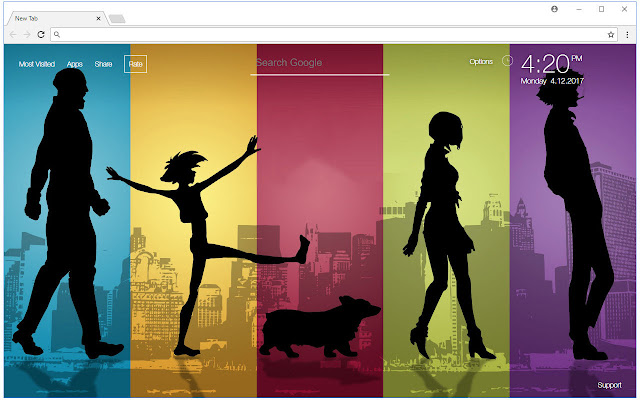