October 20 Update: New 5 Images (Scroll down to end in “Options” Box). I love the unicorns and fairy tales! Install my Unicorn Themes to get HD wallpapers of unicorns, magical horses and fairies everytime you open a new tab. 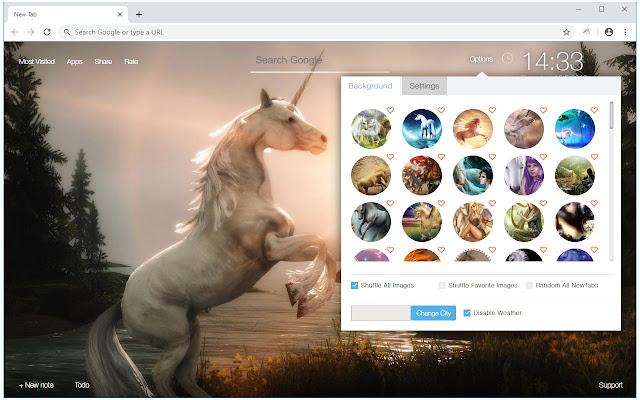 The theme inspires my daily work seeing a new unicorn picture everytime I open my browser. An unicorn is a holy, mythical and heraldic beast which looks like a horse with a horn between its ears, the horn of the unicorn is called an alicorn. It’s a symbol of purity and grace, which could only be captured by a virgin. Holy amazing! 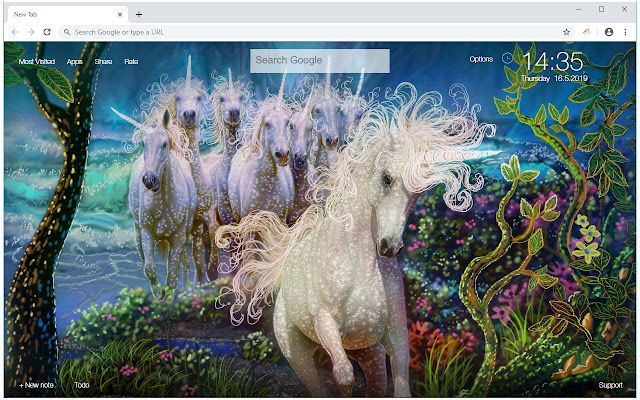 – Select your favourite wallpaper from many available unicorn wallpapers. Shuffle all pictures (randomized background images) or Shuffle favorite unicorn themes only. Updated HD wallpapers and beautiful photos of the unicorn, magical horse and fairy tales are coming soon.
– Check Date & Time instantly with a digital clock in Chrome NewTab.
– Weather indicator, current weather status is displayed directly in Chrome NewTab.
– Search with Google in the new Chrome new tab page.
– Images are included, make it loads faster. Work offline (the addon does not download anything when you open a new tab). 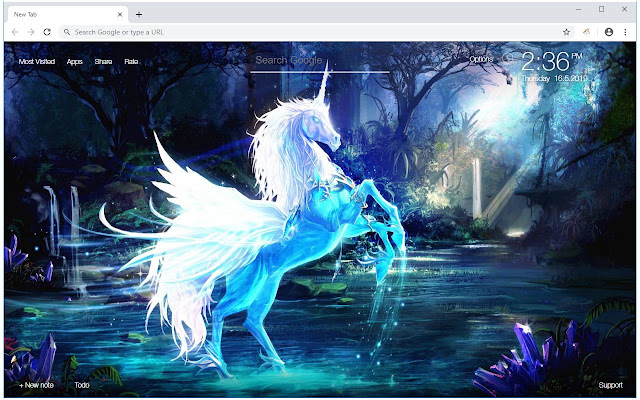 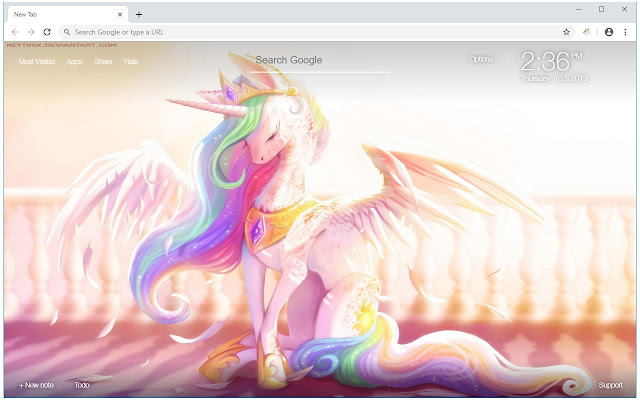 The unicorn is a legendary creature that has been described since antiquity as a beast with a single large, pointed, spiraling horn projecting from its forehead. The unicorn was depicted in ancient seals of the Indus Valley Civilization and was mentioned by the ancient Greeks in accounts of natural history by various writers, including Ctesias, Strabo, Pliny the Younger, and Aelian. The Bible also describes an animal, the re’em, which some versions translate as unicorn.
In European folklore, the unicorn is often depicted as a white horse-like or goat-like animal with a long horn and cloven hooves (sometimes a goat’s beard). In the Middle Ages and Renaissance, it was commonly described as an extremely wild woodland creature, a symbol of purity and grace, which could only be captured by a virgin. In the encyclopedias its horn was said to have the power to render poisoned water potable and to heal sickness. In medieval and Renaissance times, the tusk of the narwhal was sometimes sold as unicorn horn.