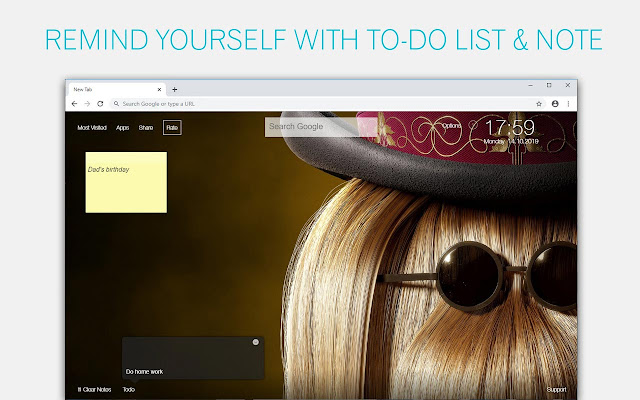 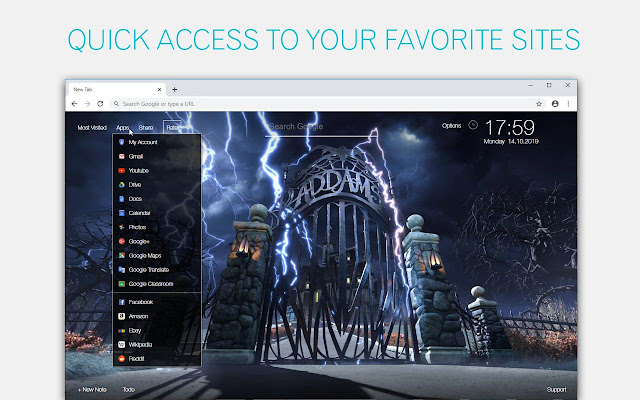 ✔ Customized new tab page featuring The Addams Family wallpapers in HD quality. Choose your favorite wallpapers, and even use many FreeAddon new tab along with this one, not just The Addams Family.
✔ Count Gmail unread emails. Quick access to most visited sites and Google Apps like Gmail or YouTube.
✔ Check out current date-time with a digital clock right on The Addams Family themed newtab page.
✔ You can also add sticky notes, to-do tasks list, reminder and countdown to events.

★ FreeAddon’s “The Addams Family Wallpaper HD Custom New Tab” extension is completely free to use. Our extension DOES NOT have ads or virus. 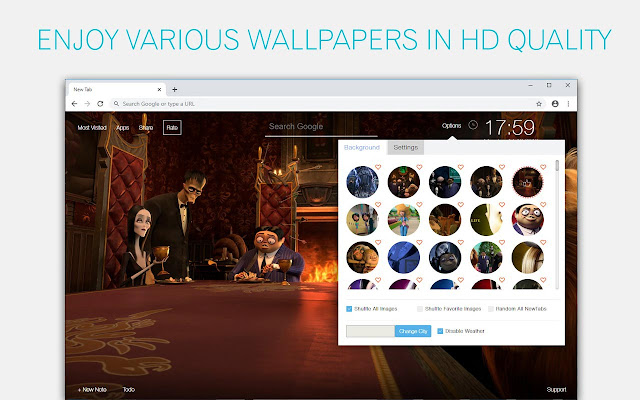 ★ About The Addams Family:

– The Addams Family is a fictional household created by American cartoonist Charles Addams in 1938. The Addams Family originally included Gomez and Morticia Addams, their children Wednesday and Pugsley, close family members Uncle Fester[a] and Grandmama,[b] their butler Lurch, and Pugsley’s pet octopus Aristotle. The dimly seen Thing (later a disembodied hand) was introduced in 1954, and Gomez’s Cousin Itt in 1965.

– The Addamses are a satirical inversion of the ideal 20th-century American family: an odd wealthy aristocratic clan who delight in the macabre and are seemingly unaware, or do not care, that other people find them bizarre or frightening. They originally appeared as an unrelated group of 150 single-panel cartoons, about half of which were originally published in The New Yorker between their debut in 1938 and Charles Addams’ death in 1988. They have since been adapted to other media. In 1964, a live-action television series, starring John Astin and Carolyn Jones, premiered on ABC and subsequently inspired a 1977 television film and cameos from the cast in other shows. An unrelated animated series aired in 1973. The franchise was revived in the 1990s with a feature film series consisting of The Addams Family (1991) and Addams Family Values (1993). Both received nominations for Academy Awards, BAFTA Awards, and Hugo Awards. For her role as Morticia, Anjelica Huston was twice nominated for the Golden Globe Award for Best Actress, and Raul Julia (as Gomez), Christina Ricci (Wednesday), Christopher Lloyd (Fester), and Joan Cusack (Fester’s wife, Debbie Jellinsky, in the sequel) received multiple Saturn Award and American Comedy Award nominations for their portrayals. The films inspired a second animated series (1992–1993) set in the same fictional universe but with Astin reprising his role as the voice of Gomez. It was nominated for four Daytime Emmy Awards, including one for Astin. Following Julia’s death, the series was rebooted with a 1998 direct-to-video film starring Tim Curry and Daryl Hannah, and a spin-off live-action television series (1998–1999). A decade later, a live musical adaptation featuring Nathan Lane and Bebe Neuwirth opened on Broadway and was nominated for two Tony Awards and eight Drama Desk Awards. The franchise has become a staple of popular culture and has also spawned a video game series, academic books, and soundtracks based around its Grammy-nominated theme song. 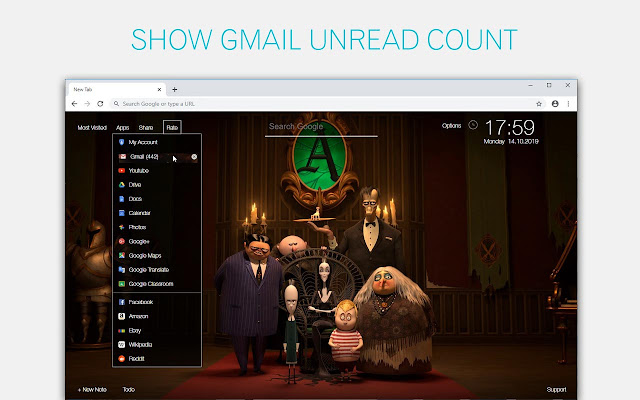 ★ About The Addams Family:

– The family has had a profound influence on American comics, cinema and television,[1][2][3] and has been seen as an inspiration for the goth subculture and its fashion.[4][5] According to The Telegraph, the Addamses “are one of the most iconic families in American history, up there with the Kennedys”.[6] Similarly, Time has compared “the relevance and the cultural reach” of the family with those of the Kennedys and Roosevelts, “so much a part of the American landscape that it’s difficult to discuss the country’s history […] without mentioning them”.[7] For TV Guide, which listed the characters in the top ten of The 60 Greatest TV Families of All Time, the Addamses “provid[ed] the design for cartoonish clans to come, like the Flintstones and the Simpsons”.[8] Owing to their popularity, the first feature-length adaption has been identified as a “cult film”,[9] while Addams Family Values was listed one of The 50 Best family films by The Guardian[10] and nominated for the American Film Institute’s 100 Years…100 Laughs at the turn of the century.[11] Ricci’s portrayal of Wednesday in the film series was ranked one of The 100 Greatest Movie Characters by Empire,[12] and in 2011 AOL named Morticia one of The 100 Most Memorable Female TV Characters. 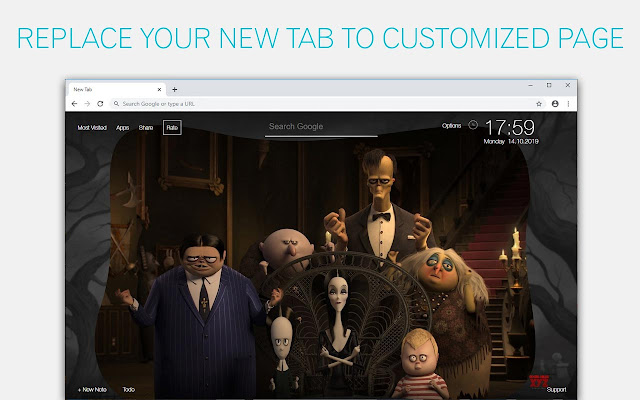