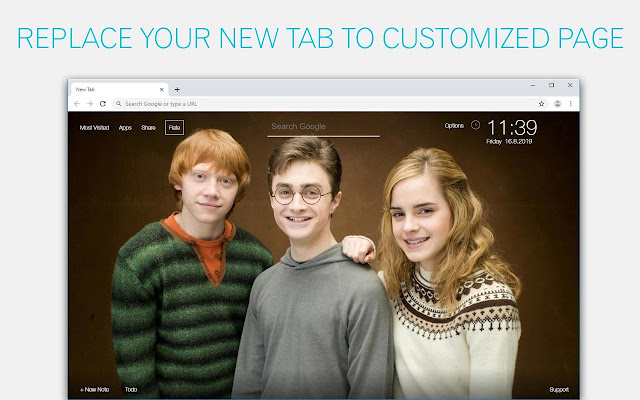 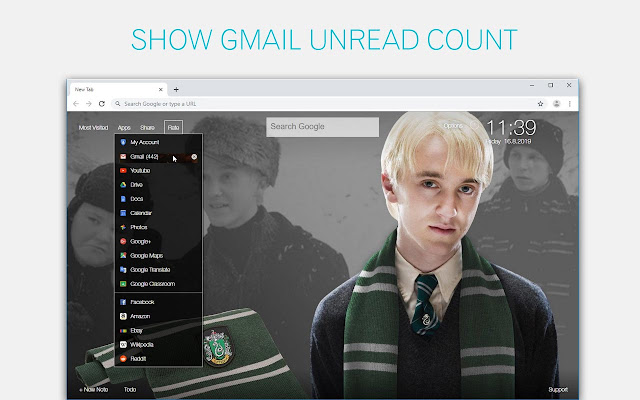 Not only that, you will also enjoy:

★ A highly customizable new tab: allowing you to select and display only your favorite Harry Potter wallpapers.  Or, you can activate the Slideshow option and enjoy all backgrounds changing before your eyes.

*This extension does not include ads, malware, or any other hidden catch! 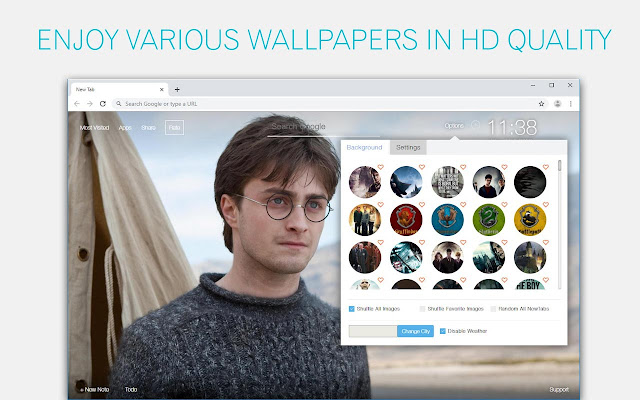 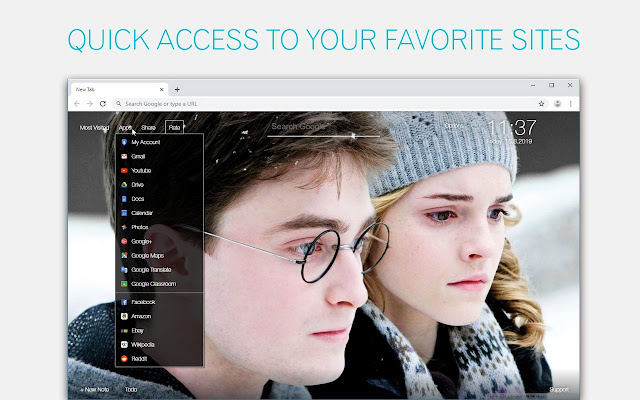 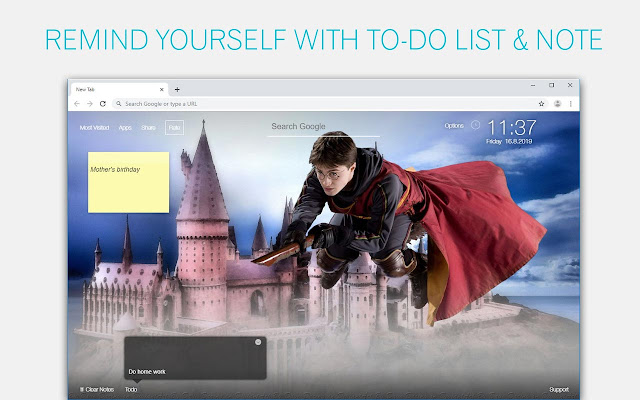 2.1. The Four Houses of Hogwarts wallpaper

House Gryffindor was founded by Godric Gryffindor and it has always been regarded as the representator of “daring, nerve, and chivalry.” Its coat of arm features a lion and associates with the element of fire, reflecting the determination and courage nature of the house.

The Hufflepuff was founded by Helga Hufflepuff and it is believed to be the House with most, loyal, trustworthy, and hardworking members. Its coat of arm features a badger and associates with the element of earth. Funny enough, House Hufflepuff is often considered as the least impressive or clever among the four Houses. That said, Hufflepuff’s welcome message implies the otherwise.

The Ravenclaw was founded by the witch Rowena Ravenclaw and has been well-known as the House of wit, learning, and wisdom. Its coat of arm features an eagle and associates with the element of air.

The Slytherin was founded by Salazar Slytherin and it probably had the most… infamous popularity due to the fact that the Malfoys are mostly in this House. However, it does not mean that the Slytherin is “evil“, especially when there is Severus Snape who is also a Slytherin. House Slytherin includes members who are resourceful, cunning, and ambitious. Their coat of arm features a serpent and associates with the element of water.

Despite being a loyal servant to the Malfoys family, this adorable little guy is a unfortunate soul who often got bullied by his Malfoys masters. Luckily, his faithful encounter with Harry finally released him from this miserable fate. And now, he is a one of Harry’s most faithful supporters.

Hagrid is the keeper at Hogwarts, and, master Dumbledore’s trusted friend. He appeared at the very first film as Harry’s new friend. Hagrid may seem to be rough, but he is definitely a half-giant with the heart of gold.

Let’s be honest, not all of us expect Neville to become so significant especially in the Deathly Hallows. At first, he was a timid, kind boy who constantly got bullied by Malfoy and his gang. But throughout the series, Neville gradually becomes a courageous young man who even dared to face the terrifying Nagini – Voldemort’s final Horcrux.

Orignally a young talented wizard, Tom Riddle (a.k.a Lord Voldemort) quickly took great “interest” in the Dark Arts. And soon after, he became the infamous Lord Voldemort a.k.a He-Who-Must-Not-Be-Named. He is considered to be the most powerful Dark Wizard of all time. He did many horrible deeds which no one dared to imagine, especially his creation of the 7 Horcruxes – the evil, forbidden wizardry creation – to achieve immortality.

The relationship between Sirius and Harry is arguably one of the best development stories in this series. Initially, Sirius was the wanted criminal who was accused of killing Peter Pettigrew and a group of Muggles. He was also suspected to be the one who led Voldemort to kill Harry’s parents. Yet ultimately, who could have guessed that Sirius was actually an innocent man. And on top of all, he was actually Harry’s godfather. Unfortunately, he did not have enough time to fully show his love for his son.

Compared to Hermione and Harry, Ron did feel inferior to his friends. At the beginning,  he seemed to be a comic relief with many silly quotes and behaviours. But that does not mean he will never be a greater man than himself. As the trio experiences different challenges, Ron has  overcome his jealousy and weakness to finally prove himself as a proud, brave Gryffindor.

If Ron Weasley tends to be a silly guy providing comic relief, Hermione is his counter-balance as a bright, smart girl who always wants to do good. She follows the school’s order and rule, but when times come, she will break the law if it serves the greater good.

Master Albus Dumbledore represents the major theme throughout the series: power of love. He may look like an eccentric, absent-minded figure but that is only the surface. After his shocking death by Sirius’s hand, Harry started to discover and accept his headmaster’s secret, and understand Dumbledore as a man who spent his entire life protecting Harry from the dark coming of Voldemort.

And here’s our main Just like every main protagonist, obviously Harry will rank high on this list. But looking at his journey, he definitely earns his popularity among fans thanks to his fascinating character development throughout the entire series. Harry is relatable to many viewers, he is selfless, compassionate. Of course, he is not perfect, he has flaws. Yet, those flaws and challenges made Harry’s journey so compelling in the first place.

Snape is the one who has arguably the best among short Harry Potter quotes: “After all this time? Always!” No doubt there will be many people who have love/hate relationship with Professor Snape. But that only proves how great his character is. In early stage, Snape looked like an “evil antagonist” from Harry’s perspective. Yet despite his troubled relationship with James Potter – Harry’s father, turned out he still loved Harry like his own son, more than anything else. He is not perfect, and some may say he is still a “villain“. Yet the fact still remains: Snape is a compassionate man who will do anything to protect his loved one.

1. Harry’s parents – James Potter and Lily Potter – are soulmates due to their Patronus (a physical personification of their souls): James’s is a stag while Lily’s is a doe.

2. Initially, J.K. Rowling planned to make Ron… died halfway when she “wasn’t in a very happy place” in her life. Luckily, she did make it happen.

3. Daniel Radcliffe (played Harry) & Rupert Grint (played Ron) both admitted that they did have crush on Emma Watson (played Hermione) in early films. (Well, no surprise there!)

4. Everybody has their reason to hate Draco Malfoy, but do you know that his actor – Tom Felton – used to audition for the role of Harry and Ron?

5. Dementors are truly terrifying creatures as they can suck your happiest memory of your life, leaving you only your worst nightmares. And, you have all the rights to be scared because they’re based on Rowling’s depression period.

6. Quidditch is wizards’ favorite sports in Harry Potter universe. Funny enough, it was actually invented after Rowling had a fight with her boyfriend.

7. Remember the girl ghost named Myrtle back in the Chambers of Secret? Turned out her actress – Shirley Henderson – was 36 when she took that role.

8. Back in Prisoner of Azkaban, director Alfonso Cuarón wanted Watson, Radcliffe, and Grint to write essays about their characters. Watson did wrote a 10-page essay (impressive!) while Grint did not submit anything. According to the actor himself, that was totally what Ron would do (it actually made sense!).

9. In Deathly Hallows, Harry noted that Hermione and Ron did hold hand while sleeping. This is particularly interesting since Hermione’s Patronus which sleeps holding hands with other otter, while Ron’s Patronus is a Jack Russell Terrier which always chases otter.

10. Michael Jackson used to propose an idea of making a Harry Potter musical. Unfortunately Rowling turned it down.